For me there was one thing… one thing I really wanted to accomplish just to prove to myself that I was still alive. Sure I was married, I had kids, and I had a company, but I wanted to work toward something for me. Just for me.

It was 2003 and the conversation with my husband went like this, “Hey, Aaron. If you buy me an iPod, I’ll run a marathon.” (Silence)
“Are you serious?” he asked.
“Yeah. Why not?” I answered.

Within a matter of days I came home and found a brand new iPod on our bed. He took the bait… and I had something to shoot for, plus I had a promise to fulfill.

I need motivation. I do. I need deadlines, and registration fees, and pressure. I need accountability. I ran a 10K once, but other than that, when I started training for that marathon I had never participated in any other sporting or racing event, by choice, in my entire life. I don’t even have one of those soccer trophies that seem to come with a good American childhood.

As a kid, I hated physical education. I thought it was torturous. Really? Can’t we just skip my turn at bat, or do I have to go through striking out and total humiliation in front of my peers?

In Physical Education at school they had this miserable idea of “treating” us to a different sport each month. (Oh, joy!) So, shortly after discovering I was especially terrible at softball, I was able to discover that I was equally as bad at volleyball. After volleyball, there was basketball, and I was miserable at that too.

Now, may I pause here and ask why anyone thinks it is a good idea to play dodge ball in junior high school? Really! Do we need to huck rubber balls at one another? In case you were wondering the person who always gets picked last for the team, is also the one that gets creamed first in dodge ball. It’s a reciprocation thing. Trust me.

I noticed one girl in my PE class who seemed to sit out every single day. I asked her how she got so lucky. She told me that she had a doctors note… she had ringworm. I wondered how I could get ringworm, too.

Never in my life was I called “sporty” or “athletic.” That was not me.

I got married when I was 21 years old. By the time I was 26, I had Leah and Lucy, and all of the surprises that came with them.

I COMPLETED A MARATHON! 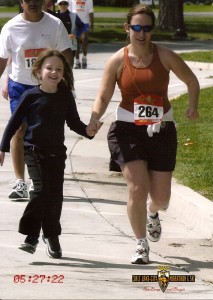 I crossed the finish line and hurried home to shower and get dressed, because I had a presentation to give later that afternoon. I was booked to deliver a presentation to parents who have children with special needs. As I was running the race, I kept thinking, “You’d better hurry up if you want to shower, put on make-up and do your hair before speaking this afternoon!”

After that goal was crossed off my list, I didn’t think much more about racing. I did “the big one.” I knew I could do shorter distances if I felt like it…and I never felt like it. Life went on.

Not too long ago I came across Athleta, a company who makes some pretty fabulous women’s athletic clothing. While shopping on their web site, I read that they sponsored female athletes. I thought, “That is AWESOME! That would be amazing!” I continued to read about their sponsorship and then I heard this little voice saying, “Rachel, that is not you. You have never won a race. You’ve taken a yoga class, but you are no Yogini. You ran a half marathon in April, but you didn’t win it. You weren’t even trying to win. You have a couple of finisher’s medals. You are not an athlete.” So, I did not apply.

I bought their clothes and wore their clothes and since I really do love the stuff, there are photos on my blog of me wearing Athleta. My friends started buying clothes from Athleta too and we would chat and shop and tweet about it. We even race together all “matchy-matchy.” Then, one day I got an email from someone at Athleta’s corporate office. The email said that they had seen my blog and were inspired by my story. They asked if I would apply to be one of their sponsored athletes!

I applied. But, when I spoke with them on the phone I was sure to reiterate how I had never won a race and how I was a mom, doing my best to be strong enough for Lucy… strong enough to be able to tell Lucy, “Yes” when so many other people, roads, and terrain would tell her “No.”

So…last month I signed an endorsement agreement with Athleta. I am one of their 2010 Sponsored Athletes! Most of the time, when I tell people about it I blush. I really do, because that “not sporty” “not athletic” 15 year-old version of myself is just bracing to get smacked with a rubber ball again. I’m waiting for someone to call my “bluff”, even though I ran two half-marathons last year. Even though I’ve hiked through Yellowstone with Lucy on my back, even though I took Lucy to Disneyland and transferred her countless times from her wheelchair to the rides and back to her wheelchair over three days… even though I had been training four times a week with a trainer to become strong enough for my daily life, training for my daughter Lucy and her wheelchair… even though I am 30 lbs lighter than when I ran 26.2 miles in 2004… even with all of that, there is still that little voice that says, “Rachel, you are not an athlete. You are just a mom.”

They said they felt my story was important to share because most women are like me; they are simply trying to find a way to balance their lives. You know what else I found out? Most women do not have a wall of medals either. They have children. They have jobs. They have circumstances that get in the way, too!

I feel really lucky, you know. Every day, my inspiration to be healthy and strong is looking right at me. She’s been living under the same roof for almost ten years. It just took me a while recognize how strong I could be. It feels so good to be able to see it in myself and know that I did it. I became what Lucy needed me to be.

Every time I lift that slippery 9 year-old out of the tub and wrap her in a towel, I feel like I am winning. I’m winning because there’s no concern in her eyes. She’s not worried that I might drop her or hurt my back, and I’m not worried about those things either. She knows that I am strong enough. I know that I’m strong enough. In those moments I smile.

It was 2009 and the conversation with my husband went like this:

“Hey Aaron, if you buy me a road bike, I’ll do a triathlon…”

63 thoughts on “Finding My Inspiration”