At the beginning of 2010 I set a goal to complete my first triathlon and to run two half-marathons. (I like to do my marathons one half at a time.) And while I was setting goals, I decided to go for breaking my personal record of running 13.1 miles in 2:05:02. This year I will break the 2-hour mark.

Do I really think life is going to simply unfold just the way I plan it? You would think by now that I would know better than that.

My 11-year-old nephew Alex (yep, that’s the Alex you all know and love) joined a Run Club. He began running three days a week after school with trainer Kasey Payzant and her club, which includes about twenty-five kids, ages six to eighteen. Then… my 13-year-old daughter Leah joined. Most of the parents drop their kids off to run for an hour, and pick their kids up later. That’s fine for most parents, especially since the Run Club is geared toward kids, but my husband Aaron and I like to do things a little different so we asked if “big kids” like us, could join too.

By the time we joined, many of the kids in Run Club had already committed to running the Salt Lake City Half-Marathon in April. Aaron and I were already registered. Last year, Aaron and I ran two half-marathons and we crossed the finish line before our two daughters, sleeping soundly at home, had even woken up. Come to think of it, we go to the gym when our kids are at school. Aaron and I often hit the ski slopes right after the bus picks up Lucy for school in the morning. My kids haven’t seen and may not even know about most of the physical activity and training that goes on in their parents’ lives!

And then… Kasey, our trainer, did something I had never thought to do.  She asked Leah if she would like to run the Salt Lake City Half-Marathon too. Leah said, “Yes!” and she was excited about it. I was a little shocked! I don’t think I had run more than a mile until I was an adult. Leah eagerly jumped into the training schedule and so far, every week we have been running together in snow, wind or rain. The Run Club motto for this year is “I can be content in any situation.” That goes for running 8 laps to reach 4 miles (*boring*) or running through hilly neighborhoods with snow catching on your eyelashes which is kind of cool and distracting.

My first race was a full marathon and I had trained for it by following a book. But as for my half-marathons… well, I didn’t really train for them. I had been doing cardio and strength training three times a week, but I wasn’t following a program to build miles. (I don’t recommend you follow the Rachel Coleman Half-Marathon-Lack-of-Training Plan.) But once we joined Run Club, we had a real, live trainer! She has been working with kids for over ten years, helping them strengthen and condition for races.

So, now we run on Monday, Wednesday and Friday. On Friday we have our long run. Leah’s cheeks are red, her hair is damp and every time she completes her mileage she stops to go through her stretching routine and says, “Wow! I just ran ___ (4, 5, 6, 7) miles. I am so proud of myself!” What an experience at age thirteen to know that you can run for an hour straight. You can run 7 miles. You can run it with a smile. Your body is strong! I am so proud of Leah!

But when Leah decided to register and join us for the upcoming race, I had to take another look at my 2010 goals. Would I rather break my personal time record… or would I rather cross the finish line with my 13-year-old daughter?

A few weeks ago while we were running Leah said, “Mom, I know there will be a lot of people in the race, so how will I find you and Dad when I finish?” I told her, “You won’t have to look far, Leah. I’ll be right there with you. We can even hold hands as we cross the finish line.”

If Leah wasn’t thrilled at the prospect of holding hands with her mom, she didn’t let on. For all I know, she was thinking, “Hold my hand? Why don’t you just run your own pace and break your personal record? Oh, well. If it will make my mom happy… I’ll hold her hand.” 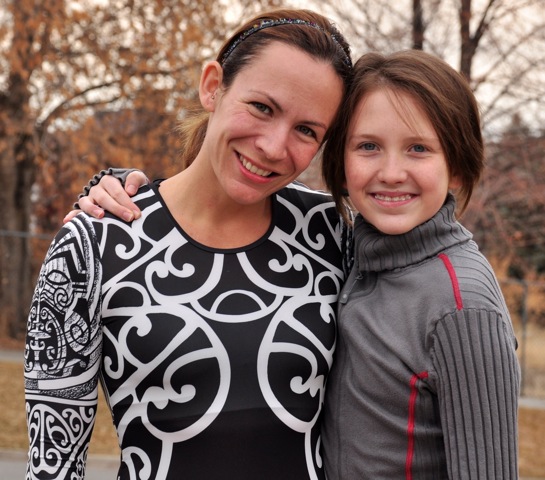 43 thoughts on “Run With Your Life”