Saturday January 14, 2012
When I stepped off the plane and my lungs and nose filled with the smoky air I was taken aback by how quickly I had forgotten, forgotten something as ever-surrounding as the air. “Oh yeah, when we get home we will all have little coughs.” Forgetting is quick… and so is remembering.

As we gathered our bags, exchanged our US dollars to Ghanaian cedis and headed through customs, Curry instructed us to keep moving and don’t meet the eyes of any agents. “Move forward unless they physically pull you aside.” Like eight little chicks following our Mother Hen we obliged. Eyes down. Move forward.

With the airport exit ahead of us more instructions came. “Hold onto your bags. Do not let go. Don’t let anyone touch your bag. Don’t take anything from anyone. Follow me.” The nine of us moved forward, single file with bags in tow. Curry had told us that this would be the only time that he would be instructing us to be totally rude.

If someone touches your bag they expect you to pay them for helping you even if you do everything to keep your bags away from them. If they touch it, pull it or lift it, you owe them money. When we visited Ghana four years ago we had that happen. With so many Americans carrying so much luggage someone is bound to let go of something eventually while loading in the tro-tro(van). Four years ago we had some very angry “helpers” demanding money for their “services” that we had not asked for and had all but fought off.

This time only one man followed us insistent on helping. A police officer actually pulled him away and told him to leave us alone. As our bags were being loaded the man returned trying to help, asking for payment, and asking for “American Magazines” that we may have brought. Once the bags were loaded the driver wiped down the dusty benches in the tro-tro and we took our places, three to a bench, for the one-and-a-half hour drive to Tutu. It was 80+ degrees and humid. There is no air conditioning, so we slid open the many side windows of the tro-tro, which after an almost two hour drive, leaves a layer of red dirt/dust plastered to our sweat. Oh well, it is Africa.

I was surprised by different things this time. It wasn’t the chickens and goats or food stands or thick smoky sky that caught my eye, but the new glass building that seemed to have shot up from nowhere, and seemed to have been completed in record time. There was a lot of new construction and there was roadwork being done everywhere. There are so many freshly painted buildings. Explanations of all this came in conversations like, “there’s a new president”, and “Ghana has more money now”, and “much of this was done in anticipation of President Obama’s visit to Ghana”.

The vehicular traffic slowed and the human traffic increased. To our right and left the road was lined with people selling everything: fried plantains, wall maps of Ghana, spade and trowel sets, stacks of bootlegged music CDs, bags of water, eggs, and loaves of bread. These wares passed on both sides of the vehicles. Yes, the buying and selling of goods occurs though the vehicle’s window, it’s the ultimate “drive-up.”

I ate a ProBar*, drank some water and leaned back on a suitcase and listened. The sensory overload and amazement of my first visit was mirrored in my travel companions conversations, gasps, comments, and photographic attempts to capture EVERYTHING. I remember the feeling of not wanting to forget and of trying to decipher the cultural differences. Wondering why it is that we grow up thinking that one thing is normal and that across an ocean they grow up thinking that something totally different is normal and amazingly we both are right!

The tro-tro pulled over and Curry jumped out and bought a few flats of water. The flats were loaded though one of the sliding windows in the back of the tro-tro and we were once again on our way.

We passed Bob Marley’s home/recording studio. Sometime in the past four years a fire destroyed much of the structure. The roof now has a gaping hole in it. I wondered if Rita Marley was living in it at the time or she has many other homes in many other places. I can’t help but wonder if there is cool Bob stuff that is just sitting in there, getting rained on. I’m not really up for trespassing.

As we continued I noticed newly painted homes and businesses even in the smaller towns. We arrive at a steep hill, we drive up it and arrive at The Courtyard Hotel. This is not the same place where we had stayed before. This is a multi-story building that once was a private dwelling. Each room is large and has it’s own bathroom. We don’t have kitchen access but there is a fridge in Curry’s room. So far the power/electricity seem reliable and we are supposed to have hot and cold running water. There is a bucket in the tub and I am wondering if it is for bathing or flushing. We will see. Last time I was in Ghana it was for both. We all got settled, not really unpacking. We keep the suitcases zipped because we don’t want to bring home any “friends”. The luggage that has food in it has to stay closed too or the ants will come marching, cockroaches too. So, by settled, I guess I mean we brushed our teeth, changed our clothes and wiped the dirt from our faces.

We all went for a walk into Mampong, there were a lot of people along the streets selling goods, cooking food and listening to loud music. The music seems to always be just load enough to blow out the bass speaker. We bought oranges and when it became dark, we turned around and came back to the hotel for our dinner… The infamous chicken and spicy rice! 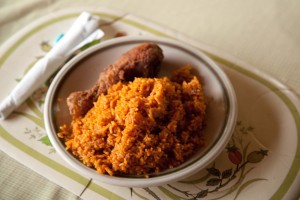 Chicken and Spicy Rice AKA Dinner

Dinner and our anti-malaria medication was rinsed down with Fanta or Coke. They did bring a few bottles of Malta (remember the healthy malt beverage for all ages brought to you by Guinness?) Now there’s some smart marketing. None of us opted for the Malta.

I dare say I am not experiencing jetlag like I had four years ago (famous last words). We finished dinner, brushed our teeth with “bottled” water (the water we purchase comes in a clear bag) and we all hit the sack by 9pm. At 3am I woke up. I stared at the darkness for a while, then I got a flashlight and checked the walls for those spiders, yeah, the big ones. I didn’t see any. I went back to sleep waking up at noon on Sunday. (See! No jetlag, waking up at noon on Sunday is pretty standard)

*Special thanks to ProBar for donating a couple hundred meal replacement bars for our trip. 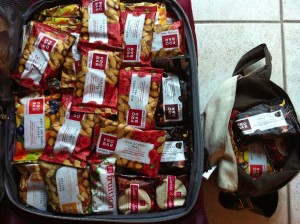