Monday January 16 2012
We were up and having breakfast at 7:30am. There was a country song playing on a continuous one-song loop. Americans, love country music, right? Breakfast was a giant omelet, two pieces of bread, and coffee or hot cocoa. Leah doesn’t eat eggs, because once she had the flu and the last thing she ate/first thing to come up was eggs and she has never eaten them since… hey it was chicken fajitas for me once when I was 9 years old. Leah had a ProBar and some of the other “supplies” we brought like fruit leather, beef jerky, cashews, and red vines… you know, just the stuff you need to survive 10 days.  Then we were off to school. It’s about a ¾ mile walk to the school. 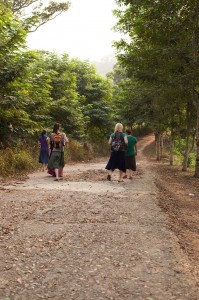 We saw Dora and Sammy. Dora who had taught me to carry water on my head (or tried to teach me) and the one who had introduced us to, the often poisonous, brain fruit.

We waited in the Headmaster’s office and she once again was so impressive with her signs and her clear requests for us to respect their culture. She is sharp. The students lined up and she signed to them (without voicing). Some in our group commented that what they just witnessed here in Ghana was more signing than they see in some of our deaf schools in the US. The Headmaster introduced us family by family. She told the teachers that we are here to help and implement programs that will help the teachers reach their students. She stated that the staffs’ focus should be the same as ours, reaching and teaching the students. The students were dismissed to help clean and set up class. The students are also responsible for keeping the school grounds clean and bringing water to class. 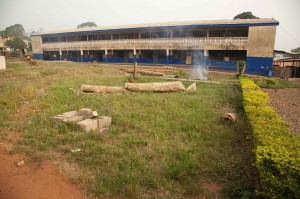 We divided up and set out to do the same.

I think that some teachers were surprised at our willingness to wash, sweep floors, dust and carry water, but in my view we are here to serve and support. We are not here to stand back, judge and criticize. Dusting Toys with a Paintbrush

Aaron, Leah and I finished everything that a lovely teacher had asked of us. We moved on to find Ronai and Ellie doing their best at managing a class of about 12 kids. The teacher had left for a staff meeting and Ronai was left in charge and had been instructed to, “Teach them something.” At first we just watched Ronai try to wrangle kids. Finally one student handed Ronai a ruler and tried to show her how to really command a the students’ attention… enough said. She quickly put the ruler down. 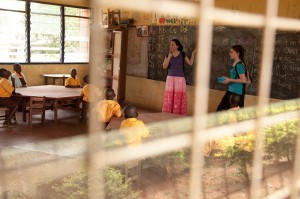 Aaron, Leah and I came in to help and we divided up the students into groups. These were THE NEW KIDS!!!! I began by teaching my group, “Hi!” and answering, “Hi!” Then I taught them table, chair, sit down, stand up, socks and Ronai taught them shoe. We continued with wait, stop, and jump. In a matter of minutes they had over 11 signs.  THIS is what I am great with. 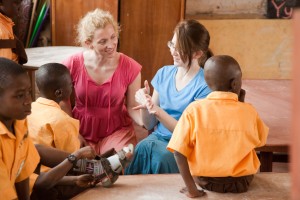 The Dorm Mother came in and said it’s snack time. She sent the children out and asked that we not allow the children to hug us, or hang onto our hands or arms during their snack time. This was a new request. I think I understand it. The kids would rather be with us than attend to whatever they are supposed to be doing. We are a distraction. I have other guesses as well, like it might make some people uncomfortable to see us so loving with deaf children. Or it might be uncomfortable that the students aren’t as affectionate with those adults that look after them.  Some of the attitudes toward the deaf are so hurtful. We had conversations with people in town who looked disgusted that we were interacting with the deaf and that we are here to teach and support them.

Then the boys both told me that their dream is to come to America once they finish high school. They said that in America the deaf are not held down and a successful life is possible.

Hmmm. So I wonder- is it beneficial for these teens to view their only chance at success as fleeing the oppression in their own country? Or is a different perspective needed?  Mahatma Gandhi said, “Be the change you want to see in the world.”

It wasn’t that long ago that deaf Americans were oppressed and many might argue that a degree of oppression still exists.

It can be difficult and exhausting to create something new, (trust me on this) even a new perspective. Much of the time your vision is misunderstood by others, you may be mocked and unappreciated but that doesn’t mean you stop, quit or give up. I’m not just speaking to those deaf boys; I’m speaking to everyone (even myself). If we only have this life, we should make it count. We can make a difference for ALL of the “new ones” who can learn from our path and our experiences. Running away may effectively free you, one person, just you. By staying and creating something new, you can impact generations.

We left the school, went to the hair salon in two taxis, we (those in the taxi with me) missed our stop and almost started an international incident when I was unsure if our taxi driver should be paid per person or per trip.  Curry to the rescue.  He grabbed another taxi and tracked us down.  Together  we started to walk back to the salon, which our taxi had passed.  It was hot.  We were all tense after I had my stand-off with our taxi driver.  While we walked we were approached by the town drunk who came straight at us saying, “Money! Money!”  Finally we arrived at the hair place.  Some of our group got their hair braided. Some didn’t. Some got grumpy. Most of us received an awkward 45 minute lecture from a traveling preacher who was speaking two-languages and sounded very serious as he read passages from the Bible and called us all to repentance. We were all exhausted. I went looking for fabric. A local man invited Aaron into a bar and bought him a soda. We walked a lot and we sweated more. 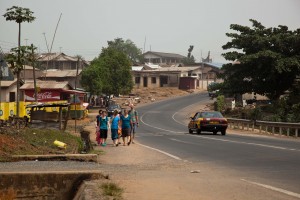 Update on the funds that we raised, we have been asked not to paint the chalkboards. Instead they would like to take the money we raised and buy whiteboards for each class. We are rolling with it.  It is Africa.

The headmaster asked Curry to do a program for the teachers on Wednesday morning, instead Curry offered that I put on a Signing Time mini-program… so… that’s happening. No pressure, right? I brought some ABC & 123 posters for the beginning classrooms and some Baby Signing Time wall posters. I brought a set of Signing Time board books and a Series One DVD set to give to the Headmaster, so she can choose to use them at home, at school or not at all. She will make her choice and I can trust it is a good one.

I saw Hannah today! I was standing on the steps at the entrance to the great room at the school and Hanna came out and greeted Curry and the team. She looked at me and said, “Who is this?” She looks like Rachel!” Curry, smiling said to Hannah, “Ask her name.” Hannah looked at me, “What is your name?” I smiled and answered, “I am Rachel.” She had a large bowl in her hands, since she oversees the school’s kitchen. She looked around quickly and ran down the stairs away from us. She ran across the courtyard and set the bowl down. Then she ran back with her arms open to hug me. She had tears in her eyes. I did too. Hannah told me, “we talk about you every day, Rachel. You taught me how to sign with Signing Time!” Four years ago when we first met, Hannah and Marco were in love, but her family would not allow her to marry Marco because he is deaf. She is now Marco’s wife and Marco says that Hannah’s mother just adores him. Little changes can make a big difference!

Marco is now on break from school, so he is here in town. She let him know that we are back and shortly after that he arrived at the school to say hello us and made a visit to say hello to the Headmaster who was his interpreter in college!!