I got up this morning and had yet to recover from my bout with the third-world’s worst stomach ache. There was no way I was putting down our daily omelet and the 2 large pieces of bread that always accompany it. We set out for the school and for the Wednesday morning devotional. 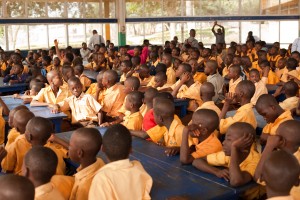 I knew what I wanted to say, but I ran a few things past Curry to be safe. It’s his long-term relationship on the line if I commit some ridiculous faux pas! I really was wishing that I could just communicate directly with the teachers and staff, without the 250 students present, because this wasn’t going to be a Signing Time concert. Turns out, I got my wish. The students were released and the staff was mine. I sent our Team to attend to the students, since all of the teachers were with me. 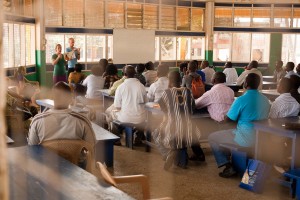 Curry introduced me and I went for it. I told them my name and introduced Aaron and Leah and reminded those, who had been on staff long enough to remember, that we had come in 2008 with Alex. I thanked them for having Signs of Hope’s programs in their school and I thanked them for allowing us to be there. I signed and spoke, since most of the teachers are hearing, but a few of them are deaf. I shared with them that Leah is deaf and that I have been teaching sign language in America for the past ten years. “Not in a school and not in a class, I teach on a television show. Can you imagine turning on your television and seeing a show that teaches sign language?” Most of them could NOT imagine that. I let them know that I understand and appreciate their struggle and I appreciate their work. I told them that Leah was only one year old when we realized that she was deaf, and I told them how she quickly picked up more 60 signs before the age of two. “I know that many of your students don’t begin communicating in signs until they arrive here at school and they are age 6 or 7. Can you imagine if your students were communicating before they arrived in your class? (They couldn’t imagine that either.) I explained to them the method we use in Signing Time; seeing the written word for literacy skills, seeing the object that we are spelling, and showing the sign for that object. I suggested that they teach all three aspects any time they are discussing a subject, rather than showing them a sign and then letting someone, later, teach the students the written word for it.

I showed them the 13 DVDs I brought, to add to their library. I flipped through the six Signing Time board books and passed them around so that they could see that even in the books we show the written word, the object and we teach the sign. We combine three things at once so that it sticks. I held up one board book and showed the first page, which happened to say “water” and it showed a spigot!! I’ve never been so happy to see a spigot in my whole life!! Together we fingerspelled W-A-T-E-R, pointed out the picture and then made the sign. They were up out of their chairs pouring over the books saying, “We need these!” I reiterated that teaching the three aspects at one time help make the concepts memorable.

Yesterday, one teacher was doing a lesson and she had said it was too difficult to teach the students every word, so she was just teaching them the signs. I was so happy that today, in only a few short minutes, I was able to explain quickly that you can teach deep and it saves time. While on topic, teach it all, rather than teaching the sign one day and bringing in the object on another day, and then trying to connect it to a written word at some point in the future.

I showed them the Baby Signing Time posters and the “ABC & 123” wall posters. (I brought three sets of each.) I said, “If you would like to use these things, I am happy to leave them for you, but if you don’t…” I couldn’t get another word out. They wanted all that I had brought and more!

As I wrapped up, I told them that I want them to know that our intention is not to come to class to judge or criticize them. “We are here to help in any way, whether it’s washing cups, sweeping floors, or supporting your teaching efforts.” Then, I thanked them, but not a simple “thank you.” I said, “I am a mother of a deaf child… and I don’t know how often the parents of your students thank you for your work,” a few of the teachers looked around like, “Right! As if that has ever, or will ever happen!” I continued, “on behalf of your students and the parents of your students, I thank you.” Ok, I had tears in my eyes, so did Curry, and most of the staff did as well. In less than ten minutes hearts were softened, connections happened, fears were laid to rest, and this group who may often feel underprepared, and likely, under appreciated, got the thing we most crave– acknowledgement for hard work. It was over. I was met with hugs and thanks and more “God bless you’s” than I know what to do with.

We headed to class and began opening the posters and going through the signs with the Primary 1, 2 and 3 teachers. Suddenly this trip wasn’t long enough. I was asked to do a teacher training with the staff on Tuesday, but we leave Monday. Another teacher asked if I would come speak to the parents at the PTA meeting in May. Of course, I started to wonder if maybe I could. (Dear Rachel, please remember to save your health and sanity first and foremost, yes, even BEFORE saving the deaf children of the world!) But let me tell you, we moved mountains today, mountains!

We opened up the posters with four eager teachers and I realized that I only had three sets. It was decided by an administrator that the sets would go to the three youngest classrooms and that teacher number four, would have to borrow from the other classrooms if she wanted to use them. This teacher was clearly deflated, quietly stating “my class needs this.” Her class is the class that Pablo and Carissa asked me to help with on the first day. It’s the class where Ellie and Ronai have been working one-on-one with the students. Leah has been in there 90% of the time as well. Remember the older kids that are year one? Turns out that is the Special Education class and this is the class that would have to borrow the new materials.

We were told that one of the boys had been thrown against a wall when his parents found out that he was deaf. They said, “His parents did not handle it well.” We were told that his grandparents are paying for him to attend school. He now has cognitive delays and walks with a limp. Excuse me while I weep. Sure, I mourned Leah’s deafness when it was discovered. I cried myself sick. I believed that her dreams (aka MY dreams for her future) had been ripped out from under us. I am by NO means a perfect parent, just ask my kids, but I don’t believe that I ever equated the fact that my child was missing one of her five senses with “futureless” or “worthless” or anything more than what that really is— deaf. A child who cannot hear is simply a child who cannot hear. The only drama and meaning around it is the drama and meaning that WE ADD to it. The drama and upset are not inherently there. How do I know this? Well, there are some people who rejoice upon discovering that their child is deaf. Leah has said that she hopes to have a deaf child herself. Deaf children are adopted from all over the globe and it’s my opinion that adopted children are the only ones who can know, without a shadow of a doubt, that they are wanted.

Deaf equals nothing other than deaf. So much more is added so often. And so, a child who is now cognitively impaired is relegated to a Special Ed. class in a third world country where Special Ed. is deemed the lowest priority when new and helpful communication tools are available. Whose heart it is big enough to hold all of that? That pain. That loss. What this boy’s family had before is what I have right now; Leah is a brilliant and beautiful gift, not only to me and to Aaron, but also to the world.

Today I can’t, I just can’t keep writing. I want to pretend that these things don’t happen.