We are now at Hans Cottage Botel (that’s not a typo) in Cape Coast. Our four-hour drive took six hours. It was 6 hours of breathing red dirt and diesel fumes without air-conditioning in a van with 10 other people. The windows were open, for better or for worse. If I end up with emphysema, I know why. I brought one bandana with me and I gave it to Leah to wear over her nose and mouth, because, I am a mom and that’s what moms do. 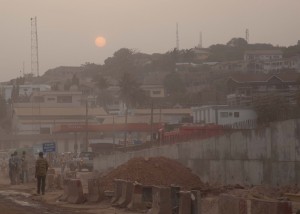 We arrived at the botel, checked in and I dare say this is the first time I’ve checked in somewhere and found rat droppings on the bed sheets and headboards. Ronai’s shower is full of bugs and more rat droppings are on the beds on her room. I finally found the giant spiders! There’s a big one in Aaron and Leah’s bathroom. Would you believe Curry had actually upgraded our rooms when he checked in.

We were all hot and sticky with layers of dirt plastered to our faces, arms and hands. We had dinner and Leah promptly threw it up, over the railing and into the pond. At least the crocodiles ate well that night. Leah may have overdosed on carcinogens for the day, who knows. Maybe it’s the Malaria pills… which is a medication that we discovered is only taken in this large quantity to keep people Malaria free AND this dose treats certain STDs. (What? Yes, that’s why the pharmacist was looking at us funny.) There you have it!

Aaron did get an electric shock while in the shower tonight. I wore shoes in the shower, so I think that’s why I escaped that excitement of getting shocked this time. I learned my lesson four years ago.

I guess I should start by writing about this morning. This morning started with our daily egg. I skipped it and had a Probar. We have polished off the coffee packets, but thankfully we grabbed a box of Starbucks Via while in the JFK airport. I had a headache when I got up this morning at 7am, as if my brain is trying to figure out WHY ON EARTH I’m getting up for the day at midnight??? My body seems to take a 4-hour nap when I hit the sack, but that’s because it’s 5pm at home and so I sleep just long enough to thwart a good night’s sleep. So… coffee, Probar, Advil and off to school I go!

This morning, Emilia measured Leah in the sewing room for a wrap skirt. The five other skirts for everyone else were already finished! 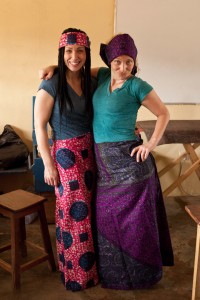 I went over to the L’Oreal Training School (it has been here for 3 years) and I got my hair plaited. They started working on my hair at 8am. They finished at 2pm. I’m not kidding!
I had such great conversations with the two teachers who were training the high school students. The teachers kindly shared their lunch with me. Three spoons, one plateful of chicken and jollof rice. I learned so much from talking to them and listening to them. We finished lunch and they asked my why I had not eaten the chicken bones too. I wasn’t sure how to answer that:) I said, “I didn’t eat the chicken bones because it has never crossed my mind that I could or should eat chicken bones.” I now know that “you get your calcium from eating the bones.” (I still didn’t eat them.)

I was a little worried when they brought a flame to my hair, but Aaron was close by and promised to “stop-drop-and roll” if things got out of hand. I may have had concerns about the giant scissors too. 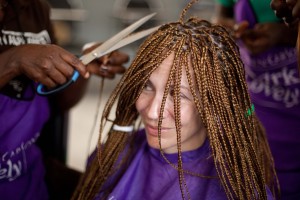 Meanwhile the rest of the classrooms were labeled by the Team and the students were taught that everything has a name and a sign. Everyone took a turn teaching. It was great! 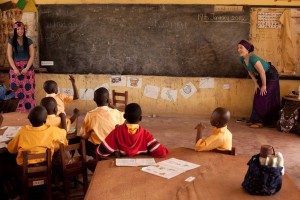 Joyce, who oversees the hotel and our dinners, had a long chat with Carissa, “you are not missionaries trying to save our souls, are you? You are all many different religions aren’t you? So, why are you here?” This lead into a lengthy discussion about deafness in the US 30 years ago, and deafness in Ghana today. Joyce suggested to Carissa and Pablo that she could learn GSL and care for some of the deaf children on break whose parents don’t come back for them.

She had told us that her mother’s name was Lucy, when we told her about our daughter Lucy Joyce. Aaron showed Joyce our family photo and explained spina bifida and cerebral palsy to her. Later, Joyce told Carissa, “their daughter Lucy is as beautiful as art, “ but she said that she was glad that we had not brought Lucy with us to Ghana because people here see her as a burden and they would offer to “help” with her. “They mean, ‘to take care of the problem’ forever.” (That’s the part where the color drains from my face and I feel sick to my stomach.) The phrase, “Don’t do me any favors” has new meaning.

We had asked Lucy if she wanted to come with us to Ghana. She thought it over. We talked about what it would take to make sure she had clean water for her medical needs, the immunizations required, and that we would mostly carry her on our backs when the dirt roads wouldn’t work for her manual wheelchair. Her power wheelchair is not an option. Lucy thought it out for days. Ultimately she chose not to go. Lucy always knows best!