Lucy insists that she is “fine!” Yesterday, I called her, then our power went out, AND then phone died. Tonight I called and apologized for the abrupt end to our previous conversation and I explained why I was unable to call her back. Her response was, “Mom, it’s okay, it’s Africa!”

Today, our plan was to sleep in a little. Our sleeping intentions were thwarted because power outages have no impact on chainsaws. At 7AM someone with a chainsaw started working and it sure sounded like it was taking place just outside out window. Leah slept like a log, of course, and we all envied her.

Part of our Team went to town and to the Cocoa Farm. The rest of us hung out, wrote in journals, or did homework. It was a HOT-HOT day!

Leah, Aaron, Carissa, Pablo, and I took a taxi to Aburi. Aaron and Leah took the first taxi that stopped because there were already a bunch of people in it and there was only room for two more bodies. Talk about “ride-sharing”! The next taxi saw that there were three of us standing on the side of the road, and he pulled over to pick us up. Here’s the thing, there was already a driver and two passengers in the taxi. The two passengers were in the back, so Pablo took “shot gun” and… wait for it… I got to sit on Carissa’s lap. The driver and the other passengers were waving us in, like this is just no big thing. As we were driving, the teenage boy in the back suggested that he should climb up front and sit on Pablo’s lap so that there would be more room for the ladies! Times like these, all we can do is crack up and the complete absurdity of it all. (This special moment was captured on camera and can be seen on Carissa’s Blog… awesome)

Curry told us that once he took a public tro-tro and the thing was packed so tightly that it was terrible, but what really made him crazy was that someone had brought their goat along and it was under his bench, licking the his calves throughout the entire ride! Can you imagine?

We got to Aburi and walked through town. I guess our seamstress takes Saturdays off, we had hoped to peek in on our dresses. We walked to the wood district. 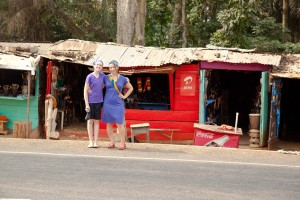 In the days before leaving for Ghana, I had asked Lucy if there was anything she wanted me to bring home for her. “Yes” she answered, “bring me a carved lollipop.” Ok, truth be told I have been to the wood district once already and have not asked anyone to carve her a lollipop. I thought maybe she was kidding, I mean a wooden lollipop? Last night while on the phone, I asked her again if there was anything special she would like from Ghana and she answered… “Yes! I told you mom, I want someone to carve a wooden lollipop for me.” Today I will ask Alfred if he even knows what a lollipop is. Jen found a Sees lollipop in her bag. I brought it with me as a model, even though it’s square. Curry bought a lollipop in town and gave it to me to take as a model too.

In Aburi, I bought a purse for me and one for Laura. I went to Sammy’s shop and bought some carvings. I bought one of Sammy’s “parent & child” carvings and one of his “lovers” carvings- these will go up on Ebay for the Signing Time Foundation. Aaron is having something special made for our friends at ProBar, he checked on that and though it’s not yet finished, it looks awesome! I crossed the road and went to Alfred’s shop and ordered the lollipop. I asked Aaron to take a photo of the gas station, because it looks cool! 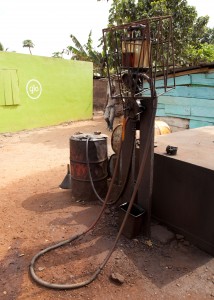 Jen, Curry, Ronai, and Ellie arrived as we were wrapping up. Carissa picked up her custom nativity scene and an angel for her mom. We bought bags of water to drink and we walked back to the taxi station. Aaron, Leah, Pablo, Carissa, and I all got into one taxi. This time, Leah sat on my lap. 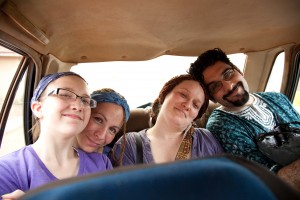 Joyce is the very sweet, on-site manager of the hotel. She is very quiet. She is continually surprising us with things like telling Carissa to tell Aaron to “stop trying so hard with using his right hand, we have ‘leftys’ here too!” (In Ghana you do not use your left hand to wave at people or during a business transaction. The left hand is considered unclean. Though at the deaf school you can use your left hand for signing. You should see the amount of additional steps Joyce takes in avoiding her left hand when serving us dinner, and opening our sodas and pouring them into glasses.)

Another night Joyce let us know that if a Ghanaian guest is joining you for dinner, you wait for their arrival before you start eating. This is common sense, but we had forgotten what night it was and we had forgotten that a guest was joining us. Joyce helps keep us from making complete fools of ourselves, when she can.

Dinner has been chicken and rice, most of the time. She thinks it’s funny that we order it nightly because, “there are other things to eat.” She found it even funnier when she heard that most of us ordered chicken and rice for dinner, when we spent the night in Cape Coast. Tonight we are having spaghetti with the hot, spicy red sauce. One night we did have vegetable stew and rice. It was cooked cabbage and carrots and onions in the spicy red sauce.

Part of the fee that we each paid in our Ghana expenses was to sponsor some of the deaf children who would otherwise be unable to attend school. We also raised some money for a service project here. The request was that we do some painting and we had been asked to re-paint every chalkboard… they are blackboards and wow, you sure end up with a lot of black smudges all over yourself when you use them. When we arrived at the school, we were told that painting the backboards was no longer necessary, but they wanted us to take the money for the paint and supplies and purchase whiteboards. Curry suggested that they might get more for the money if a Ghanaian made the purchase, rather than if we went to town. (You wouldn’t believe how much some of us have paid for taxis and other things, simply because it’s obvious that we are not local.) The whiteboards should be hung by Monday.

Tomorrow, Marco and Hannah are coming to visit. It will be great to spend some time with them.

Every night we sit here in the common area. We share snacks like licorice and cashews. We talk, laugh, decompress, and sing. The spontaneous singing seems to throw off Carissa. I, for one, think it’s quite normal to burst into song! (Hard to imagine, I’m sure.) Oh, and our bat circles through the common area. Yes, the bat is back, every night.